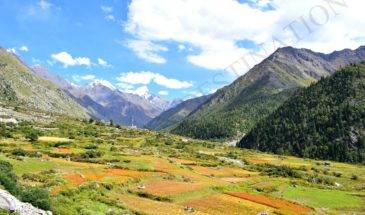 Kalpa, a small village situated near the Sutlej river valley falls under the Kinnaur District of Himachal Pradesh. This destination is known for the Kinnauri culture, magnificent sceneries, and apple orchards. It is house to meandering roads, chilgoza forests, and…

Kalpa, a small village situated near the Sutlej river valley falls under the Kinnaur District of Himachal Pradesh. This destination is known for the Kinnauri culture, magnificent sceneries, and apple orchards. It is house to meandering roads, chilgoza forests, and beautiful streams from the mountains. This beautiful village and the Kinnaur District also consists of several sacred shrines and temples of the Buddhist and Hindu people. Our Kinnaur-Kalpa tour will include all the popular destinations of these locations.

The places you will visit in this Kalpa-Kinnaur tour from Chandigarh:

Our Kinnaur-Kalpa tour from Chandigarh will also include Chandigarh. So, you will get the chance to visit this beautiful location as well. So, plan your Himachal Pradesh tour from Kolkata or Hooghly, today.

After pick from Chandigarh / Kalka Railway station / Airport, start your wonderful vacation to Hidden Himachal Spiti Valley called Mini Ladakh with Kalpa-Kinnaur, starting from Shimla. Shimla renowned its name as Queen of hills due to its flattering sceneries and colonial heritage which has retained its charm from British India time to till now. Reach Shimla within 4 hours and check into the hotel. After some rest and post lunch explore Mal & Kali Bari by own. Dinner & overnight stay in hotel at Shimla.

Shimla to Sarahan via Rampur

Today morning after breakfast check out from the hotel and proceed towards Sarahan. On the way to Sarahan, cover the sightseeing of Kufri Fun world, Fagu Valley, Green Valley. On the way stop for lunch at Rampur and enjoy the beauty of Rampur village. You can enjoy the journey with beautiful Satluj river. Sarahan known for the temple of Goddess Bhima Kali. The village is surrounded by apple orchards and opposite to the Sarahan you can witness the Shrikhand Mahadev Peaks (5155M). On reaching at Sarahan, check in to the Hotel, after some refreshment visit the Temple by walk. Dinner & overnight stay in hotel at Sarahan.

Today morning after breakfast check out from the hotel and proceed towards Sangla. On the way to Sangla your only companion till Karcham is Satluj river. Enroute cover Jeori, Badhal, Bhaba Nagar, Tapri & Karcham. Enjoy some beautiful moment at the side of Karcham Dam. After Karcham left Satluj and go with Baspa river. On reaching at Sangla, Check in to the Hotel, after getting fresh n up explore the hamlet by own. Dinner & overnight stay in hotel at Sangla.

Today Morning after breakfast visit the Kamru Fort (1 hours trekking required) followed by an excursion to Chitkul village via Rakcham & Mastarang. Chitkul is a fairy land located at the bank of River Baspa. The traditional houses, temples, Gompa and the people of Baspa valley conjure up the perfect image of Shangri La. After some enjoyment take lunch at Chitkul. During back Journey you can visit Batseri Village which is on the way to Sangla In evening get back to Sangla. Dinner & overnight stay in hotel at Sangla.

Today morning after breakfast check out from the hotel and proceed towards Kalpa. On the way to Kalpa your only companion till Karcham is Baspa river. After Karcham leave Baspa and follow the Satluj river. Enroute cover the sightseeing of Karchan Dam, Songtong & Reckong Peo and the new Monastery. Reckong Peo is the district headquarter of Kinnor district. On reaching at Kalpa, Check in to the Hotel, after getting some refreshment explore the hamlet with sightseeing Roghi village, Chini Village, Chaka Peak, Sapni Fort, Suicide Point, Hu-Bu-Lan-Kar Monastery, Narayan-Nagini Temple & Kinnor Kailash. Dinner & overnight stay in hotel at Sangla.

Today morning after breakfast check out from the hotel and proceed towards Rampur. En-route your companion will be Satluj & Baspa river. Reach Rampur in the afternoon. Check-in to the hotel. Dinner & overnight stay in hotel at Rampur.

After breakfast check out from hotel and leave Rampur and proceed towards Chandigarh / Kalka. On the way you can enjoy Narkanda & Hatu Peak sightseeing by own and after noon drop you at Chandigarh / Kalka Railway Station or Airport for your further journey while recalling all the memorable moments of your exotic trip…

When I can travel in this area?

It will suggested that if you love a mix of some snow, colors and blooming flowers, then go for the spring season, March & April is to explore the hidden Himalayan destination. Otherwise, visit Kinnaur Valley in summer if you want to beat the heat of plains and camp beside the river away from the mad rush of tourists. And, if you love vivid colors and apples in apple orchards, go for late monsoon or autumn months. Finally, if you love tons of snow and want to make snowmen then visit Kinnaur Valley in winters.

It can be fully customized as per customer's choice. Customer can choose any date as per there availability.

Is there any hotel in this Route?

Yes, there are options of hotel in Shimla & Manali but limited options are available at Sarahan, Sangla, Chitkul, Kalpa & Rampur.

Deluxe category hotel will be used for this package. But anyone can upgrade there package options as per availability.

What type of document is required for visit this Route?