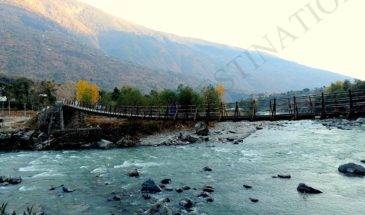 GANGTOK (3N) + LACHEN (1N) + LACHUNG (1N) North Sikkim Tour is the most beautiful excursion of Nature, especially, the exploration of the eastern mountain of the Great Himalayan Range. North Sikkim hugs the Himalayan Mountains closely and is different from…

North Sikkim Tour is the most beautiful excursion of Nature, especially, the exploration of the eastern mountain of the Great Himalayan Range. North Sikkim hugs the Himalayan Mountains closely and is different from any other place in India. One of the most breathtaking landscapes in India, the region of the Northern part of the Sikkim state is the marvel of Nature of the Earth. The northern zone of Sikkim is the coldest, prettiest and has a wild celestial beauty that few can resist. The pristine view of the white snowy mountain tops, vivacious waterfalls, bustling rivers, majestic lakes and the vivid flora and fauna have the capacity to spellbind its visitors with its spectacular Natural untouched beauty.

Lachung : A serene little hamlet nestling on the banks of the Lachung River, Lachung is the best possible destination for those who really love nature. Incidentally the name Lachung means small pass. It is close to the Tibet border and offer to the guest scenic views, a melting pot of culture, ubiquitous handicrafts and wonderful natural flora. Lachung is famous for its fruit production…apples, peaches and apricots are found in abundance there.

The Lachung Gompa is one of the primary attractions of this small hamlet. This ancient monastery was built in 1880 and it lies amidst a luscious apple orchard. You can easily recognize the monastery as it has two identical metal dragons and huge prayer wheels. Try walking through the village to the monastery… it’s a short walk and you get to see many sights on the way. You can either opt for the main Katao road that leads up to the signed gateway of the monastery or you can take the longer and prettier route that forks left after the bridge.

Yumthang Valley:  A lovely little place in North Sikkim, the valley of Yumthang is well known for its hot sulphurous springs and valley of beautiful rhodenderons. Home to 24 different species of these beautiful flowers Yumthang is also called the Valley of Flowers of North Sikkim. North East India’s loveliest river Teesta flows right through the Yumthang Valley making it a place like the paradise.

The lovely Singhba Rhodenderon sanctuary that contains more than 24 species of rhodenderons is a part of Yumthang valley. Total area of this sanctuary is more than 43 sq. km. it’s possible to take day trips in the sanctuary between 8:00 a.m. to 3:00 p.m. with the help of a local trained guide.

A small tributary of Teesta flows besides Yumthang valley and there is a hot spring with alleged medicinal properties in that area. Enroute to Yumthang valley you will see lots of natural streams along with some excellent views of peaks of Pauhunri and Shundi. Go to a little more north and found another good tourist attraction is Yumesamdong or Zero Point that’s full of fascinating views of the Himalayas with Tungabhadra Shiva temple.

Phuni Valley: One of the loveliest and yet relatively unexplored skiing destinations in Northern India, Phuni is just 20 km away from Lachung. In fact you can use Lachung as a base for exploring Phuni though it deserves a special individual mention. The snow that covers Phuni all winter, lovely gentle slopes and an altitude of 11,500 feet makes it an attractive destination for ski lovers across the globe. The SMA (Sikkim mountaineering association) organizes Ice Skiing Festivals at Phuni every March for 15 days to popularize this sport among tourists.

Lachen:  Lachen means Big Pass with full of beautiful scenic sights. Lachen has not yet become as big a tourist destination like Lachung so there is an untouched beauty about the place. In summers the annual Yak race takes place here and that’s an ideal time to visit. The Lachen Gompa presides over this small hamlet and luscious forests form the canopy. Snow clad peaks are easily visible here and in the spring many varieties of flowers dot the place.

Gurudongmar Lake: Gurudongmar is considered to be one of the highest altitude sweet water lakes in the world. The lake is known after Guru Padmasambhava who had paid a visit here in the 8th century. The revered Guru Nanak had also visited and blessed this lake in the 15th century. This lake treated a holy lake. The Gurundongmar Lake is sustained by glaciers, this lake also source point of the famous Teesta River. The surrounding area is known as Gurudongmar and is populated by blue sheep, yaks and other species of wildlife.

Chopta Valley: Chopta Valley is not green like most other parts of Sikkim. it has rather a barren and austere landscape that seems exotic. In the spring however the valley transforms itself and becomes a riot of colours. Chopta valley is used a lot as the base for the extreme high altitude trek. Chopta Valley comes on the way from Lachen to Gurudongmar Lake. One can see a 360 degree view of the Himalayan ranges from here. Rare endemic species of flora and fauna are found in Chopta Valley. The colourful monals, flycatchers, whistling thrush, warblers are just some of the beautiful birds found in this region.

Morning Pickup from NJP railway station or Bagdogra Airport and proceed towards Gangtok. Chek-in to the hotel. Evening you can roamed around MG Marg. Overnight stay in Gangtok. Gangtok is the capital of the mountainous northern Indian state of Sikkim. Established as a Buddhist pilgrimage site in the 1840s, the city became capital of an independent monarchy after British rule ended, but joined India in 1975. Today, it remains a Tibetan Buddhist center and a base for hikers organizing permits and transport for treks through Sikkim’s Himalayan mountain ranges.

Wake up early to enjoy a beautiful hilly morning and have a delightful breakfast. After breakfast proceed to the beautiful Tsomgo Lake and the famous New Baba Mandir. Get ready to begin your excursion tour of top Gangtok attractions. Perched at a height of 12,400 feet, the enchanting Tsomgo lake is the most visited tourist attraction on your Gangtok family tour package itinerary. Further, visit the Baba Harbhajan Mandir, one of the most sought after tourist attraction on your sightseeing tour itinerary. By late evening, reach your hotel in Gangtok. Evening you can roamed around Lal Market and sleep off the night with wonderful memories of the day.

Morning after delightful breakfast pick up from hotel and Proceed to Lachen (120k.m.). it is about 7 hours drive from Gangtok. The Lachen Monastery located on a top of the village commands a panoramic view of the surrounding hills and countryside at an altitude of 9,800 ft. On the way stop for sightseeing at Seven sister waterfalls. Lunch will be served at Mangshila. After proceed toward Naga Waterfalls, the confluence of Lachen Chu and Lachung Chu at Chungthang. You are likely to reach Lachen at late afternoon / in the evening. Night halt at Lachen surrounded by fir – clad mountain peaks, overwhelming peace and solitude.

LACHEN to GURUDONGMAR LAKE to LACHEN to LACHUNG

Early morning around 3:30 AM proceed towards Gurudongmar Lake (17,100ft.). Breakfast will be served on the way in cool weather with worm hospitality. Gurudongmar lake is considered as one of the sacred lakes of the state both by the Buddhists and the Hindus. The lake remains milky in colour throughout the year and it is believed that Guru Padmasambhava touched the lake whilst he visited Tibet from this area. via Thangu situated at an altitude of 14,000 ft. is about three hours drive from Lachen. It is a small Village where the visitors usually acclimatize before they proceed to Guru-Dongmar Lake and Chopta Valley (13,200 ft.). Thangu Valley is a broad valley at the junction of Thangu Chu, Chopta Chu and Lassur Chu. In the spring end /summer months you will be fascinated by many hues all around as Rhododendrons, Primula and many other Alpine flowers are in full bloom. In the winter months you can play in the snow or even walk over frozen rivers. The Unspoilt beauty of the area will take your breath away. Come back to Lachen for lunch. After lunch proceed towards Lachung. On the way see the beautiful Twin Waterfalls and Bhim Nala Waterfalls, Amitabh Falls. You are likely to reach Lachung at afternoon and check in to hotel, overwhelming peace and solitude.

ACHUNG to YUMTHANG VALLEY to LACHUNG to GANGTOK

Early morning around 5:00 AM proceed towards Yumthang Valley (11,800ft.). Breakfast will be served on the way in cool weather with worm hospitality. Yumthang at an elevation of (11,800 ft.) and 28 kms from Lachung is a paradise for nature lovers with a fascinating blend of flora and fauna and breathtaking scenic grandeur. The valley is also the home of shingbha Rhododendron Sanctuary having 24 species of Rhododendrons. On the way you may visit the famous hot spring. Yumthang is a large valley surrounded by mountains where the tree line ends. In April/ May /June the valley erupts in a riot of colours as Rhododendrons, Primula and many other Alpine Flowers are in full bloom. In the winter months, Yumthang is somber with snow all around, and the snow clad mountains adding to the ethereal beauty. Come back to Lachung. After lunch pack off your luggage then drive back to Gangtok. Evening you can enjoy in the MG Marg & Lal Market and complete your last day shopping. Overnight stay in Gangtok

After leisure arrived in the morning enjoy the weather. After breakfast leave Gangtok and proceed towards NJP Railway Station / Bagdogra Airport for your further journey.

Be the first to review “Magical North Sikkim” Cancel reply

For Folower Lovers – Colorful Singhba Rhodenderon sanctuary the season of flowers is from March to middle of June but preferred time is month of April.

Monsoon Season – July to till September.

Pre Winter Season – One can enjoy the pleasant and cold weather from October to mid of December.

Winter Season – Due to heavy snowfalls road may close and found frozen lakes & water streams during Mid of December to March.

February to March is also the season of Losar festival and the locals put up amazing cultural shows, food extravaganzas and musical programs in this area.

THINGS TO REMEMBER FOR THIS TRIP?

Note that most of North Sikkim is high altitude and the air has rarefied oxygen levels so you need to acclimatize yourself at base camps & gradually increase your night stay. Avoid long stretches of travel that involve drastic shifts in the oxygen levels in air. Avoid too much physical activity for long time & specially notice on your children and senior Citizen. You also need to travel in a sturdy vehicle like a Jeep as the roads are mostly rocky and full of sharp turns. It’s better to hire a good driver and vehicle from a reputed Tour & Travel agency for exploring North Sikkim.

No foreigners are allowed to the Lachen and Gurudongmar Lake. But they can enjoy only at Lachung and Yumthang Valley.

Please note that several parts of North Sikkim falls under protected area and you would need a special permit and go through a trusted / reliable Tour & Travel agencies.